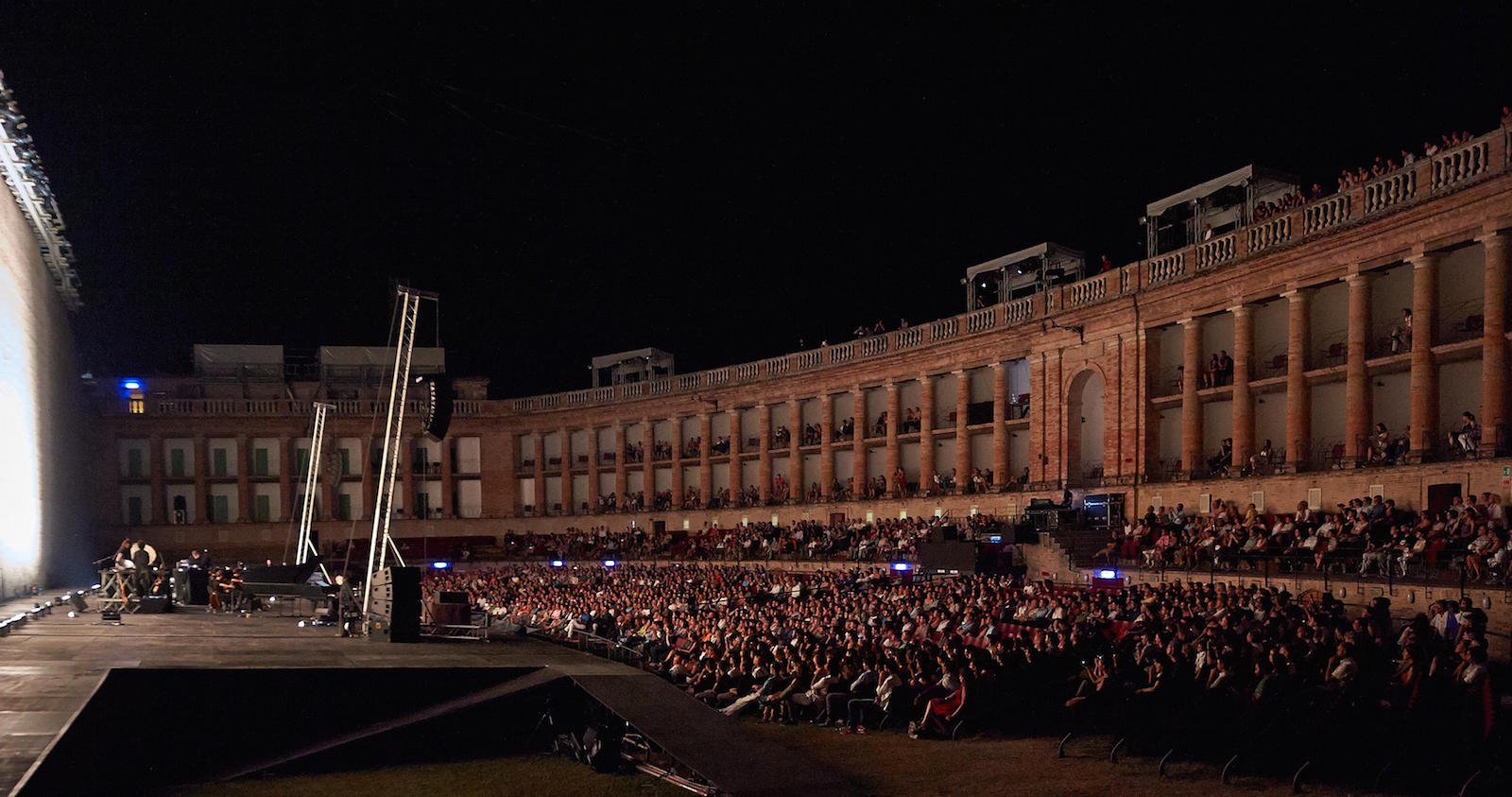 The Sferisterio of Macerata stands out as one of the most prominent architectural structures of the late European Neoclassical Style. In the first half of the Nineteenth century, a few wealthy gentlemen living in Macerata decided to enrich their city with a permanent structure used to host the game with ball and bangle and, at the same time, as an arena for the ‘steccato’ and for bull fighting, which was very popular at the time of the Papal State. Construction began on 2 October, 1820, according to the drawings provided by Salvatore Innocenzi.

However, these were soon replaced by a project designed by Ireneo Aleandri, a young architect from San Severino Marche (MC). The Sferisterio was inaugurated on 5 September, 1829. The very special shape of the building – which includes a playing field, a series of rooms for various purposes, a supporting wall, boxes and balconies – was carefully designed to encompass the needs of the sports activities which were popular in the first half of the Nineteenth century. The building, which is in line with the best Neoclassical taste and betrays a Palladian influence, is not only magnificent per se, but it perfectly blends with the city landscape. The harmonious structure ensures perfect visibility and wonderful acoustics.

Over the years the Sferisterio, which had been conceived for sports activities, turned into a venue for opera performances. The first opera to be staged at the Sferisterio was Aida, in 1921, under the auspices of the Society of Citizens led by count Pieralberto Conti. Thus, in those years the arena was turned into an open-air theatre. A huge, curved stage was built and the orchestra was placed just below it, while numbered seats for the audience were arranged all around the stage area. A large opening was made at the centre of the background wall, so as to provide a grand entrance for the triumphant victory of the Egyptian conqueror.

The town authorities put their best effort into increasing accommodations as well as hospital facilities and, on the whole, everything was done to make people’s stay in this town as pleasant and long as possible. Aida was performed 17 times for an overall amount of more 70,000 viewers, a record which has never been broken since. The following year La Gioconda was staged, this time with no great success. In the wake of this failure, opera performances at the Sferisterio were halted.

After World War II, the Marche had very few occasions to listen to “bel canto”. In 1967, Carlo Perucci from San Benedetto del Tronto set up the “Opera circuit of the Marche”, in the hope to give life to a solid organization. When he reached Macerata, he proposed to set up a performance at the Sferisterio and the managers of the time welcomed his suggestion with enthusiasm. Thus, the opera season was set up again and the excitement of the town mayor, Mr. Ballesi, became almost contagious. Within a short time, a new stage was built and three arched entrances were carved out of the background wall, while the whole theatre was equipped with a good lighting system.

Perucci also did his best to bring to Macerata a number of outstanding performers: Del Monaco and Protti for Verdi’s Otello but also Antonietta Stella and Nicola Ruggeri for Giacomo Puccini’s Madama Butterfly. Members of the orchestra came from every corner of the region, while the settings were so well-constructed that they almost seemed to be a natural backdrop. On 3 August, the lights went down and the notes of Verdi’s opera began to play: it was an incredible success.

At the end of the Eighties, the Municipality of Macerata, the Province administration and the civil society named “Eredi dei Cento Consorti” joined their efforts to give life to Associazione Arena Sferisterio, which was to organize and manage the summer opera seasons. Since then, a summer festival called ‘Macerata Opera’ has been taking place each year, drawing audiences from all parts of Italy and beyond. The greatest fascination of each performance is provided by the Sferisterio itself, whose architectural beauty blends in with the settings and has made it possible for international directors to stage unforgettable operas. Among them are Don Giovanni directed by Job, La Traviata and Lucia di Lammermoor directed by Henning Brockhaus, Turandot by Hugo De Ana, Tosca and Faust by Deflo. Verdi’s opera Oberto conte di San Bonifacio, which was staged in 1999 at the nearby Lauro Rossi theatre, equally deserves special mention for the admiration it aroused. Over the years which saw Claudio Orazi as artistic director, the Sferisterio welcomed on its stage all the best international performers like Luciano Pavarotti, Placido Domingo, Monserrat Caballè, Marilyn Horne, Fiorenza Cossotto, Ruggero Raimondi, Mariella Devia, Josè Carreras, Katia Ricciarelli and Renato Bruson.

Several awards have been given to Macerata Opera for its successful seasons; among them is the famous ‘Premio Abbiati’, three of which went to the Sferisterio in 1993. Moreover, three outstanding lyrical organizations in Italy (Opera di Roma, Comunale di Bologna and La Scala di Milan) have been staging productions borrowed from the Sferisterio, while in 2002 the success of Macerata Opera was crowned by the triumphant staging of Puccini’s Turandot in the most popular opera house in Tokyo and, subsequently, in the magnificent open-air theatre of Cesarea, Israel.