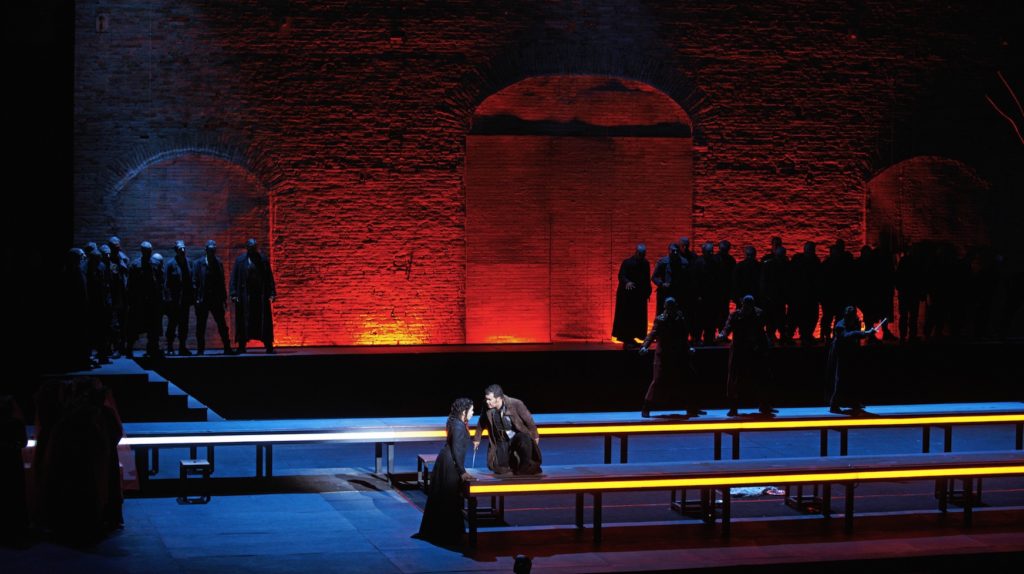 From 17 July to 9 August, 2020, the Sferisterio stage will host Tosca, Don Giovanni and Il trovatore. As the 2019 edition of the Macerata Opera Festival was about to start, a preview of the forthcoming 2020 edition was offered, with the theme #biancocoraggio (white as courage) closing a series of three, color-inspired seasons, including #verdesperanza (green as hope) in 2018 and #rossodesiderio (red as desire) in 2019. #biancocoraggio will revolve around the issues of emancipation, the Enlightenment and destiny, as they are found respectively in Tosca, Don Giovanni and Il trovatore.

The 56th edition of the Macerata festival will open with a new production of Giacomo Puccini’s masterpiece, Tosca, followed by two other major works, namely Don Giovanni by Wolfgang Amadeus Mozart and Il Trovatore by Giuseppe Verdi. When the programme was approved by the Sferisterio BoD, a decision was also made by the Board to extend the contract for Barbara Minghetti (Artistic Director) and Francesco Lanzillotta (Music Director) until 2021.

Tosca is the work that brought Puccini and his two favourite librettists right into the Twentieth century, with a tragic triangle of love, power and freedom that grips all characters, both positive and negative, and sees them defeated by fate soon after the tenor sings the famous aria “E lucevan le stelle”.

Those notes will resound all the more perfectly under the Sferisterio sky, where Tosca returns after 6 years. Don Giovanni, written in 1787, led the pair Mozart-Da Ponte to achieve unprecedented results that were pivotal for opera in the years to come. In this work, love, cynicism, rationality and boldness blend into a plot full of metaphors and enriched by timeless melodies, such as “Madamina, il catalogo è questo” and “Là ci darem la mano”. Don Giovanni was last seen in Macerata in 1991, staged at the Lauro Rossi theatre.

Il trovatore was written in 1853, with a libretto by Salvatore Cammarano. It belongs to Verdi’s so-called popular trilogy and it is the epitome of opera Romanticism. Last staged at the Sferisterio in 2016, it offers a mixture of love, mystery and obscurity, moving from the intimate notes of “Tacea la notte placida” to the frenzy of “Di quella pira l’orrendo foco”.