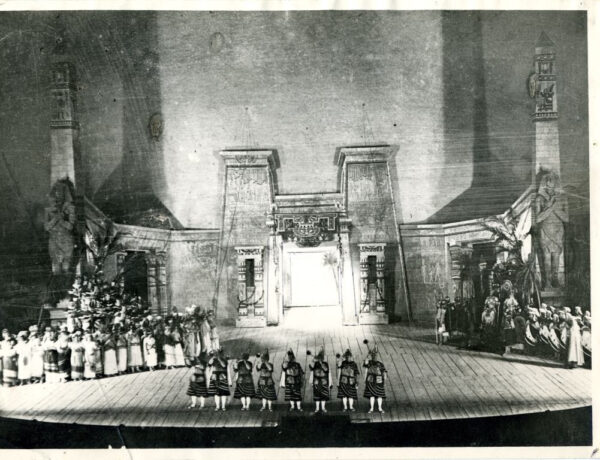 Aida, Il barbiere di Siviglia and La traviata are the three opera titles chosen for this centenary: two new productions and a production which has made history.

1921-2021. One hundred years after the first opera staged at the Sferisterio – Aida on July 27, 1921– the Macerata Opera Festival is preparing for a year of celebratory events that will culminate in the programme for summer 2021. The titles are: Aida by Giuseppe Verdi, Il barbiere di Siviglia by Gioachino Rossini and La traviata, again by Verdi.

The 2021 edition will be inaugurated (on Friday 23 July) with the same opera chosen in 1921 by Count Pier Alberto Conti for the love of the soprano Francisca Solari (who was the protagonist). In this way, the Sferisterio, formerly a stadium for an ancient ball game (which welcomed the sports heroes of that time, such as Carlo Didimi, as mentioned in Giacomo Leopardi’s poems) was turned into a venue for opera performances. Aida will be a new production entrusted to director Valentina Carrasco, from Argentina, who worked with the Spanish theatrical group Fura dels Baus. She also signed Tosca, which was meant to be staged at the Sferisterio in 2020 (performances on Sunday 1 August, Saturday 7 August, and Thursday 12 August). On the podium: the musical director of the Macerata Opera Festival, Francesco Lanzillotta. It will actually be a double celebration: Aida, one of the most loved operas, premiered in Cairo in 1871, so this will mark its 150th anniversary. For history buffs, after the first performance in 1921, Aida was staged at the Sferisterio in 1969, 1973, 1976, 1982, 1985, 1989, 2000, 2001, 2006, 2014, and 2017.

The second title is Il barbiere di Siviglia, a comic masterpiece by the most famous and celebrated composer from the Marche region, Gioachino Rossini. It will be staged at the Sferisterio arena, after many years of absence, on Saturday 24 July (then on Friday 30 July, Friday 6 August, and Saturday 14 August). Also, a new production is planned for this second title, which will be chosen through an international competition for direction, scenes and costumes reserved for artists who are under 35, in collaboration with Opera Europa and Rossini Opera Festival (participants shall present their project by 10 September 2020). The jury will include Ernesto Palacio, Superintendent and Artistic Director of the Rossini Opera Festival, who was also among the interpreters of the first edition of the Rossini Opera, organised at the Sferisterio in 1980 (other editions in 1984 and 1995).

The third title will be the most representative and iconic production of the last thirty years, La traviata “of the mirrors” conceived in 1992 (and then restaged seven more times before 2018) by Josef Svoboda and Henning Brockhaus. It will feature new costumes and will be premiered on Sunday 25 July (then on Saturday 31 July, Sunday 8 August, and Friday 13 August).

The path towards this edition will be marked by a series of celebratory events. The first will be a social media initiative that will accompany us over the 365 days that lead to the start of Macerata Opera Festival 2021 (23 July): photos, memories, and thoughts collected from the Sferisterio archive, from audiences, from the workers and artists who trod the Macerata stage.

The deadline for submitting projects regarding the rebranding of the Arena Sferisterio Association and the logo of the Macerata Opera Festival 2021 “Sferisterio 100 × 100” is 30 July 2020 (at 12:00).

Ticket sales will open symbolically on July 27, 2020. Prices remain unchanged compared to this year’s edition and the seating plan will be the ordinary layout (following the likely end of the health emergency). Therefore, it will be possible to use vouchers for the purchase of 2021 tickets.