For Gateano Donizetti’s Elisir d’Amore the chosen setting is the seaside, with cabins and inflatable toys, as designed by outstanding director Damiano Michieletto. His Elisir is both entertaining and thought-provoking, widely acclaimed both in Valencia, where it debuted, and throughout Europe. It is a perfect example of the opportunities for new readings of traditional operas inspired by nature and the environment.

On the podium Francesco Lanzillotta, the Sferisterio Music Director, who will conduct some of today’s most appreciated belcanto artists such as John Osborn at his much-awaited debut as Nemorino, Mariangela Sicilia as Adina and Alex Esposito as Dulcamara, who will be engaged in selling elisir, i.e. magic potions, in the form of modern-day energy drinks. 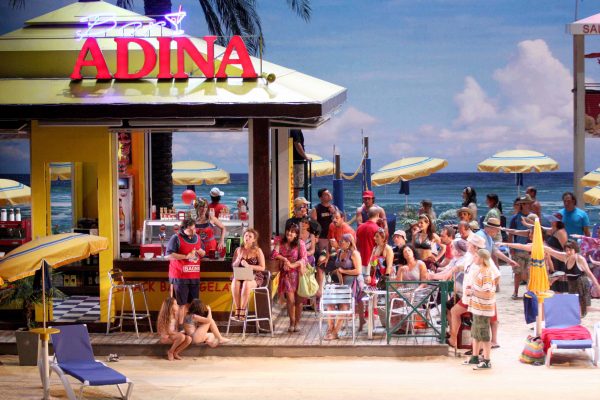 In a very short time, Damiano Michieletto has come to be recognized worldwide as one of the most brilliant Italian directors of the new generation. He studied opera and theatre production at the Paolo Grassi Academy in Milano and he also got a degree in modern literature at the University of Venice, his hometown. His production of Schwanda the Bagpiper by Jaromír Weinberger, widely acclaimed by the critics at the Wexford Festival in 2003, won him the Irish Times ESB Theatre Award. His other opera productions include L’Italiana in Algeri at Teatro Olimpico in Vicenza, La Gazza Ladra co-produced by Rossini Opera Festival in Pesaro, Comunale in Bologna and Arena in Verona (who brought him the Abbiati Prize in 2008), Lucia di Lammermoor, Il Corsaro, Luisa Miller and Poliuto in Zurich, Roméo et Juliette and a Mozart/Da Ponte cycle at Teatro La Fenice in Venice, Die Entführung aus dem Serail at San Carlo in Naples, La Scala di Seta at Rossini Opera Festival and La Scala in Milano, Il Barbiere di Siviglia at the Grand Théâtre de Genève, Madama Butterfly in Torino, L’Elisir d’Amore in Valencia, Graz and Madrid, The Greek Passion by Martinů in Palermo, Così Fan Tutte at the New National Theatre in Tokyo, Puccini’s Trittico at the Theater an der Wien and the Royal Opera in Copenhagen, Un Ballo in Maschera at La Scala, Idomeneo at Theater an der Wien, The Rake’s Progress at the Leipzig Opernhaus and La Fenice in Venice. In 2012, he made his debut in Salzburg with La Bohème, to return in 2013 with Falstaff and in 2014 with Cenerentola. In 2014/2015, he worked on Il Viaggio a Reims at the Nederlandse Opera in Amsterdam, Guillaume Tell at the Royal Opera House in London, and new stagings of previous productions of Il Barbiere di Siviglia and Così Fan Tutte at the Opéra in Paris and Liceu in Barcelona.

In 2015/2016, he signed new productions of Mozart’s Il Flauto Magico in Venice, Cavalleria Rusticana and Pagliacci at the Royal Opera House in London (Olivier Award 2016) and Rossini’s Otello in Vienna. In Autumn, 2016, two new productions were issued: Samson and Dalila at the Opéra in Paris, and Aquagranda by Perocco at La Fenice in Venice.  In 2017, Falstaff at La Scala in Milano, Il Viaggio a Reims at Kongelige Teater in Copenhagen and Teatro dell’Opera di Roma, Il Flauto Magico at Opera di Firenze, Idomeneo at Maggio Musicale Fiorentino. In 2018, he will be working on three, new productions: Die lustige Witwe by Lehár at La Fenice in Venice, A Midsummer Night’s Dream by Britten at Theater an der Wien and Don Pasquale by Donizetti at the Palais Garnier – Opéra de Paris.

Damiano Michieletto is also extremely active in theatre productions, which are as important as operas in his career. Amongst his many endeavours, let us recall a widely praised version of Il Ventaglio by Carlo Goldoni, followed by Gogol’s L’Ispettore Generale for Teatro Stabile del Veneto, Divinas Palabras by Ramón María del Valle-Inclán for Piccolo Teatro in Milano and, in 2016, a new production of Brecht and Weill’s L’Opera da Tre Soldi, again for Piccolo Teatro in Milano.